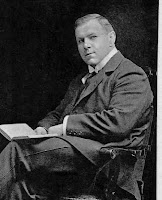 GEORGE HACKENSCHMIDT
Born Aug 2nd 1878   George Hackenschmidt - known as the 'Russian Lion' was born of German & Swedish descent in Estonia, once part of the USSR, now independent and rightly proud of its famous countryman.

A 'strong-man' from the age of 18 he became a champion wrestler by 1900. He then continued an unrivalled career as a word-class wrestler, winning many prestigious awards. His career culminated in a match with the renowned Frank Gotch which he lost. He retired in 1911 and went on to write several books on both philosophy and physical culture. He remained in contact with the fight and strength fraternity. Hackenschmidt died at the age of 90, in London, in 1968.
Posted by Keith Payne at 1:46 PM