Well done is better than well said.
Benjamin Franklin
Posted by Keith Payne at 7:46 AM No comments: 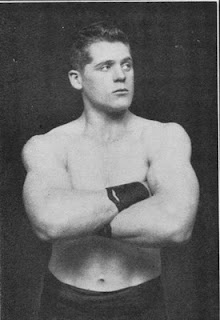 Ron Walker died Oct 25, 1948. He held no less than 21 British Heavyweight records. This included One Hand Snatches of over 200lbs, and most importantly today, a Two Hands Snatch of 297½lbs.

This Snatch of 135kg in December 1936 was the first ever World Record on one of the Olympic Set performed by a British lifter.

Posted by Keith Payne at 6:12 AM No comments: 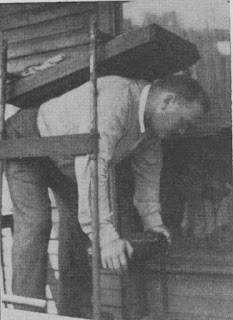 October 23, 2010 Warren Lincoln Travis was inducted into the  Association of Oldetime Barbell & Strongmen Hall of Fame.Warren Lincoln Travis was perhaps America's first famous strongman. Emerging on the strength scene near the turn of the 20th century, Travis become famous for back lifting and other feats with massive weights that had been made popular by some of the great European strongmen. Based in Brooklyn, he traveled the country, and even outside the US, displaying his strength and challenging all to try to duplicate a combination of ten feats that Travis preferred. He became truly famous after winning jewel encrusted belt offered by the Police Gazette, then the most widely read sporting publication in the US. He died when he was in his 60's, shortly after performing on on his beloved Brooklyn stage.
Posted by Keith Payne at 2:29 PM No comments: 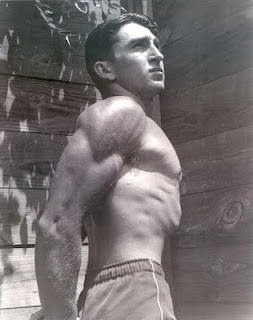 Vic Boff was born on October 22, 1917, in Red Lion, PA.He was the founder of the Association of Oldetime Barbell & Strongmen. Renowned for his encyclopedic memory regarding the Iron Game, Vic was consulted by anyone interested in Iron Game history.
Posted by Keith Payne at 11:44 AM No comments: