Josef Steinbach of Vienna, Austria, was one of the greatest weightlifters and strongmen of the early 20th century. Some of his best marks include: a two-hand Continental and Jerk of 387 pounds, a two-hands Snatch of 264-3/4 pounds and a two-hand Continental and press of 335 pounds (besting Louis Cyr's mark by 34 pounds.) He won the world amateur weightlifting title from 1904 through 1906 and went on to win the Gold medal in the "One Arm" event and a Silver medal in the "Two Arm" event at the 1906 Olympics.
Josef Steinbach died on January 15, 1937. 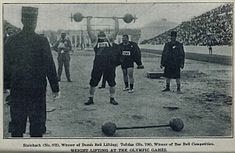 Posted by Keith Payne at 6:38 PM No comments: